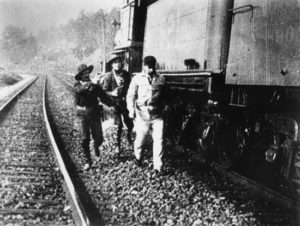 History of the motion picture, history of cinema from the 19th century to the present.

The illusion of motion pictures is based on the optical phenomena known as persistence of vision and the phi phenomenon. The first of these causes the brain to retain images cast upon the retina of the eye for a fraction of a second beyond their disappearance from the field of sight, while the latter creates apparent movement between images when they succeed one another rapidly. Together these phenomena permit the succession of still frames on a motion-picture film strip to represent continuous movement when projected at the proper speed (traditionally 16 frames per second for silent films and 24 frames per second for sound films). Before the invention of photography, a variety of optical toys exploited this effect by mounting successive phase drawings of things in motion on the face of a twirling disk (the phenakistoscope, c. 1832) or inside a rotating drum (the zoetrope, c. 1834). Then, in 1839, Louis-Jacques-Mandé Daguerre, a French painter, perfected the positive photographic process known as daguerreotypy, and that same year the English scientist William Henry Fox Talbot successfully demonstrated a negative photographic process that theoretically allowed unlimited positive prints to be produced from each negative. As photography was innovated and refined over the next few decades, it became possible to replace the phase drawings in the early optical toys and devices with individually posed phase photographs, a practice that was widely and popularly carried out.